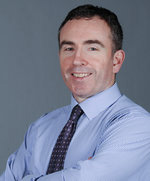 Paul Gibbs qualified at Charing Cross and Westminster Medical School in 1992. He did his higher surgical training in South West England, 1997 to 2004, which included an MD in renal transplant immunology. He worked in renal transplant units in Cardiff, Oxford and Portsmouth before being appointed as a vascular and renal transplant surgeon in Portsmouth in February 2005, where he is clinical director of the transplant programme. He has performed many non-directed kidney transplants.