This September non-directed kidney donor, Ray Duffy, I and his good friends Glenn (of Glenn Gordon Mountaineering) and Neil Busby (of Climb Caledonia Ireland) climbed the iconic Scottish sea stack, The Old Man of Hoy.  At night. The climb was special for Glenn as in January 2018 he had a bad climbing accident and was told to give up the sport. Yet less than two years on he is back like Ray, after his donation, doing what they love. The purpose of the climb was to again raise awareness for living kidney donation and show that donating a kidney does not usually impact the donor’s lifestyle or ability to live a full and healthy life. 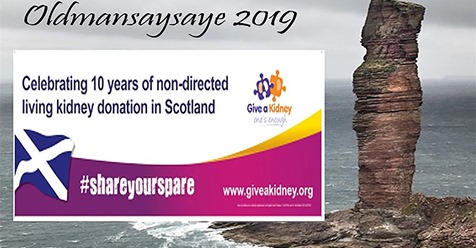 Ray also raised several thousand pounds to support Give a Kidney and we are very grateful to him and all the team for taking on this epic challenge. Ray’s story was picked up by media around the world as far away as India, Australia and the USA and continues to raise awareness. To read more about the heart-warming story that inspired Ray, and what he plans next visit his website at his website or to make a donation visit his Just Giving Page. Thanks Ray!