The history of kidney donation?

Non-directed (formally known as altruistic) kidney donation from living donors is an uncommon but growing practice in the UK. The number of people willing to give the gift of life to someone who is not only unrelated to them by blood or marriage but a complete stranger is growing all the time. In 2007/08 only 6 people gave a kidney and at first only around 10 donations a year were expected, but the figures have increased dramatically. and usually between 80-110 people donate in this way in the UK each year.

It’s often said that non-directed donation became legal for the first time in 2006. In fact, although it is not known to have happened before then, there was nothing in the law to stop living donors giving their kidneys to anyone they chose, including a stranger, long before that – as the first legislation covering living donation was not passed until 1989. The Human Organ Transplants Act 1989 was rushed through Parliament in response to a “kidneys for sale” scandal in which impoverished men from Turkey were recruited to Britain to provide kidneys for paying patients. The organisation that regulates doctors in the UK, the General Medical Council, brought proceedings against three doctors, including one of the leading transplant surgeons of the day. One doctor was struck off, and the other two had conditions placed on their practice.

The 1989 Act made it a criminal offence to transplant an organ if the donor and recipient could not be proved to be genetically related, unless the donation was approved by a new body, the Unrelated Live Transplant Regulatory Authority (ULTRA). ULTRA counselled potential donors who wanted to give a kidney to a husband, wife, partner, close friend or sibling to whom they could not prove, by tissue typing, to be related, to make sure they were giving fully informed consent. ULTRA received some requests to allow non-directed donations from strangers, but in the wake of the kidney scandal Government ministers were opposed to the move, and the requests were rejected.

In 2004 new legislation, the Human Tissue Act, was passed in response to yet another scandal: the retention of dead children’s organs by pathologists at Alder Hey Hospital, Liverpool, and other hospitals without their parents’ knowledge or consent. This Act, which came into force in September 2006, set up a new authority, the Human Tissue Authority (HTA), to regulate all uses of human tissue, including organ transplantation. By then, in the light of experience in the United States and in response to pressure from surgeons and others working in the transplant field, it was decided that donations to strangers should be allowed.

The HTA must approve all organ transplantations involving living donors, whether or not they are related to the recipient. All donors are assessed by an independent assessor, to make sure the donor understands what is involved, is not under any pressure to donate and is giving consent freely and voluntarily. So-called non-directed altruistic donations, where the donor does not choose the recipient, are then considered for approval by a panel of HTA members.

Non-directed donations are allowed in a number of countries, including the United States, Canada, Australia, the Netherlands and Spain.

In some countries, including the UK, the non-directed donor has been linked to what is known as a “paired/pooled” donation scheme.

Paired/pooled donation schemes: how they work

When a living kidney donor and recipient are incompatible or mismatched with each other, it may be possible for them to be matched with another donor and recipient pair in the same situation and for the donor kidneys to be exchanged or swapped between the pairs. This means that each recipient receives a kidney from someone unknown, and the donors, likewise, donate to a recipient who is not known to them. When two pairs are involved like this, it is called a paired donation, and with more than two pairs it is called pooled donation. The benefit of this type of donation is that each recipient receives a living donor transplant that they would not otherwise have had. 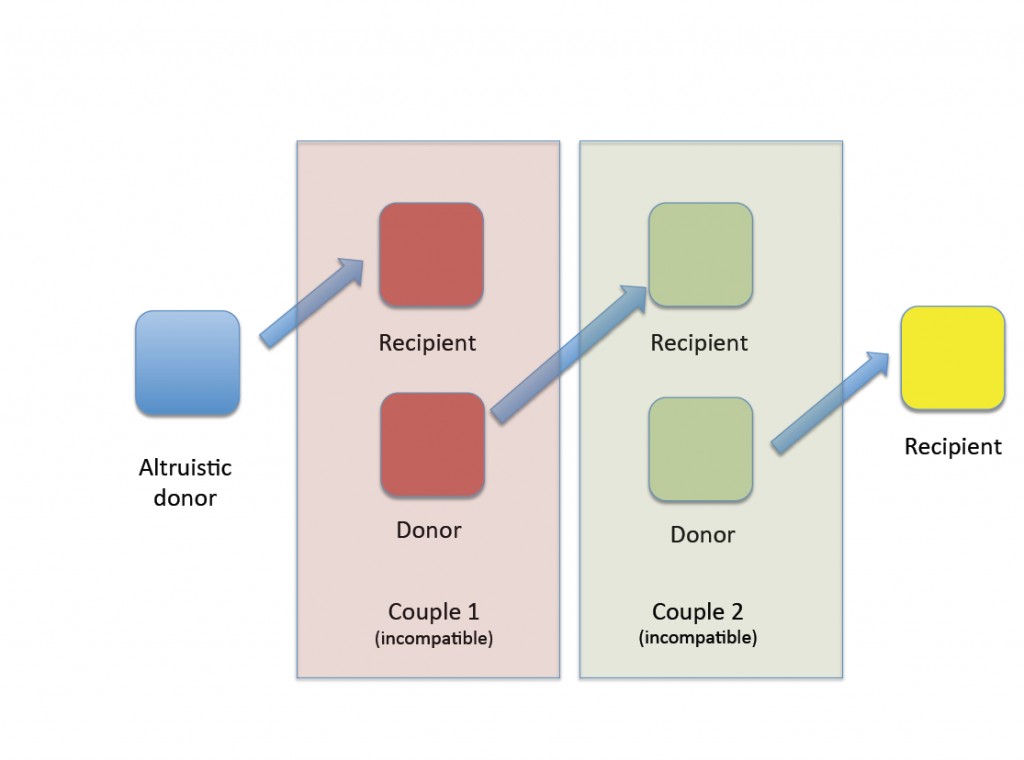 From January 2012, non-directed donors in the UK were able choose to donate into the paired/pooled scheme instead of directly to the national transplant waiting list, creating “altruistic donor chains”. The donated kidney will be matched to a recipient in the paired/pooled scheme and, in turn, the donor registered with that recipient donates to another recipient, and so on. The chain ends when the last donor donates to a recipient on the national transplant waiting list. Currently up to three transplants may be in a chain in the UK.

From 2012, non-directed donors were asked whether they would be willing to donate into the paired/pooled scheme to create a chain, but they could opt out if they wish and instead donate directly to the national transplant waiting list.

In order to make the very best use of donated kidneys, from January 2019, all non directed kidneys began to be defaulted into the kidney sharing scheme to trigger a chain (and therefore make more transplants possible), unless there is a high priority matching patient on the waiting list, in which case the kidney is offered to them. This means that every non-directed donor stepping forward is likely to trigger 2-3 transplants that otherwise may not have been possible.