The UK statistics are stark:

Meanwhile, humans only need one kidney to lead a full and healthy life.

A kidney transplant is the very best treatment option for many people with kidney disease, but the waiting list is long. Most people wait an average of three years for a transplant but, for some, the wait is much longer. If more people donated a healthy kidney, the waiting list for transplants would shrink. Many more people with kidney disease could come off or avoid dialysis and regain their health and independence.

Not only do kidneys from living donors work better and last longer (on average), but the organs are thoroughly assessed for suitability and the surgery can be planned in at the best possible time for the donor, recipient and surgical team.

Until 2006, all living donors were either relatives or friends of people who received a kidney transplant. In 2006, guidance under the new Human Tissue Act stated that altruistic kidney donation was permitted. Non-directed donation, sometimes also known as altruistic donation, is the term that describes a donation that is given without knowledge of who is going to receive the kidney. An altruistic donor simply volunteers to give away a kidney to someone who needs it. NHS Blood and Transplant then finds the most suitable person to receive the kidney, and the transplantation is arranged by the local kidney transplant centres of the donor and recipient.

All non-directed donor kidneys either go to a high priority recipient on the waiting list or are now pu, by default, into the UK kidney sharing scheme which allows the ‘unlocking’ of up to three transplants.

The sharing scheme involves four or more people, made up of two or more “couples.” One person in each couple is waiting for a kidney transplant, and the other wants to give a kidney to them but is not a good enough match to them (perhaps their blood type is different or their tissue type does not match). He or she therefore volunteers to give a kidney to a member of a couple in a similar situation, in return for a kidney for his or her partner. Essentially the kidneys are ‘swapped’ to a recipient who matches each donor.

If a non-directed (altruistic) donor offers to donate his or her kidney to such a scheme, it can ‘trigger’ an altruistic donor chain with two or three people receiving a kidney, who may not otherwise find a suitable transplant. Therefore your single kidney can enable up to three transplants – helping three recipients and shortening the waiting list even further! 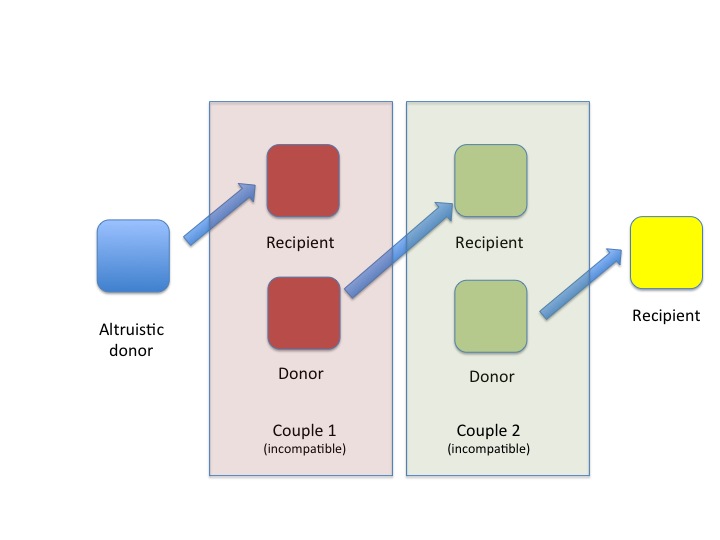 The donation of a kidney also saves the NHS a great deal of money. Keeping someone on a dialysis machine costs about £29,000 a year, or £290,000 over 10 years. The cost of a kidney transplant over 10 years, by contrast, comes to only £102,000, which includes the cost of the operation, the cost of follow-up appointments and the cost of drugs that the patient has to take to stop the body rejecting the organ. So the saving over a 10 year period could be around £200,000. (Source: Specialised Commission Team West Midlands, 2010)

If you think you would be interested in becoming a kidney donor, see the section called “How do I go about donating a kidney?” You can also find out more at www.organdonation.nhs.uk