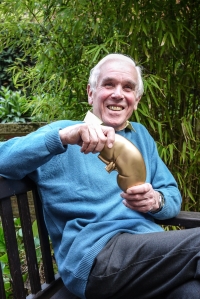 It was an easy decision for me to make.

Nicholas Crace is a former charity director from Hampshire, gave a kidney to a stranger in spring, 2012. He was, at the time, the oldest person in the UK to have done so at aged 83 – although there have now been older donors.

Nicholas Crace had good health and no dependents when his wife, Brigid, died in the summer of 2011. Nicholas was at first kept busy sorting out her affairs. He had looked after Brigid, with the help of carers, since she had had a stroke in 2005 and this had kept him fully occupied. So he found having plenty of time but little to fill it with, an unfamiliar situation. At the age of 83 he found appropriate voluntary work hard to find, and enrolling as a volunteer driver for the local hospice solved only part of the problem.
All his life he had been a blood donor (57 donations) and he thought of offering to give bone marrow, but was too old to be accepted. So his thoughts turned to the possibility of giving one of his kidneys.
“I cannot remember quite what put the idea of being a living kidney donor into my mind,” he says, “but in September 2011 I thought that it might be worth investigating. After all, I was in good health, had no dependents and had plenty of time at my disposal. A call to the NHS Organ Donor Centre gave me the location of the nearest Renal Transplant Centres, one at Portsmouth and the other at Oxford. I decided to contact Portsmouth (Queen Alexandra Hospital).”

Donating a kidney is not simple. The health of the potential donor has to be thoroughly examined, as well as the wellbeing and anatomy of the kidney, and this involves a number of tests. During the six months after he put his name forward he made fourteen visits to the hospital for tests and examinations, each involving a round trip of nearly 100 miles. Although the tests are painless and unstressful, each one could have revealed a reason for the kidney donation being unacceptable, which led to his increasing anxiety as each test was successfully concluded. “I would have been very disappointed if I had been turned down,” says Nicholas. “I was ideally placed to be a donor after the hospital had established that I was fit and had excellent kidneys. One can live perfectly happily with only one kidney – in fact some people are born with only one.”

“A new lease of life”

“We know from numerous studies”, says Consultant Surgeon Sam Dutta, who performed the operation, “that a living donor kidney performs better [than one from a deceased donor], works quicker and lasts longer; all the detrimental factors related to being on dialysis, leading to early death because of heart problems, are completely taken care of by a good functioning kidney. An altruistic donor coming forward is an amazing thing for us. The recipient just gets a new lease of life”

“I couldn’t have lived with myself with the knowledge that I had had the chance of changing someone’s life and turned it down,” said Nicholas. “Giving a small part of me to someone else will make little difference to my life but a huge difference to someone else’s – it was an easy decision for me to make. I was lucky to be in a position to help someone else less fortunate than myself.”